One afternoon in late February, Walt and I were out at our favorite taqueria.

“I need your help,” Walt said.

“What?” I said, surprised to hear him request something from me. He usually told me what he wanted as if I had no choice.

“A friend of a friend got this girl preggo.”

“That could be a problem. Anything else?”

“She wants to marry him.”

“Did your friend of a friend have sex with this underage mother to be?”

“Who else slept with her?”

“I’d say there are three possibilities. The first is to marry the girl.”

“Aagh!” Walt groaned, dropping his taco. “He can’t do that. That would be a death sentence. What’s number two?”

“Say no to the girl and face the music. Unfortunately, there’s a good chance he’d go to prison for statutory rape.”

“Negotiate a cash settlement and offer to pay for an abortion or to support the kid until it’s eighteen.”

“How much would it cost?”

“It’s pretty simple, Walt. If you don’t want to marry the girl or go to prison, talk to the mother and negotiate a settlement.”

“Will you do that for me? It would be a good test of your lawyerly skills.”

“How much money do you have?”

“No, to pay off mother and daughter.”

“Intuition—call it my sense of proportionality, what’s right.”

“I can get more if I have to, borrow from my father. I could tell him I have some extra expenses for the apartment house, something like that.”

Walt looked away from me, took an enormous bite out of a fiery hot pepper taco—rather to suffer than tell me her name. Tears filled his eyes, the heat—he grabbed his Pacifico to clear his palate. “Ula,” he said, barely audible.

“Ula, that lovely young surfer girl. You dirty dog. Jesus, Walt. Have you no shame? You’ve slept with her mother on multiple occasions, pounding the floorboards next door.”

“Don’t judge me, Joey. I’m an attractive young man in the prime of my life.”

“You’re a privileged horn dog is what you are.”

“The problem with that defense is that we can’t establish she’s promiscuous without naming other suitors. Anyone named would be guilty of the same offense you are.”

“Don’t lose heart, Walt. I’ll see what I can do. Keep your checkbook handy.”

END_OF_DOCUMENT_TOKEN_TO_BE_REPLACED 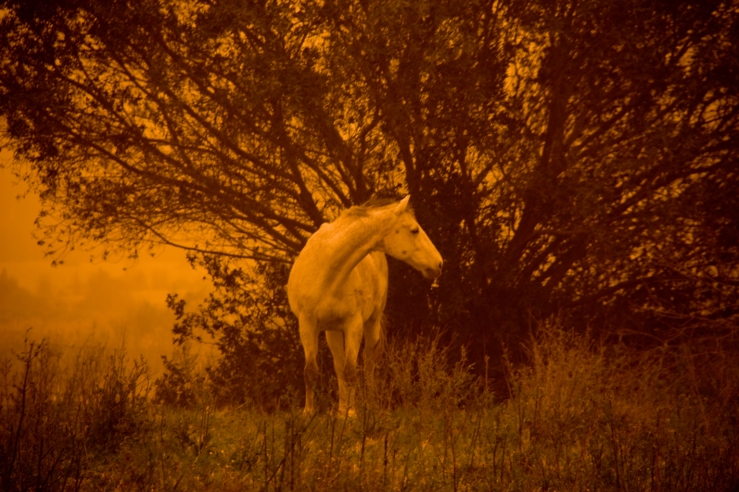 Sunday afternoon, I was sitting under my oak enjoying the view, watching for Red Fox. She made her appearances unpredictably, usually in late afternoon. Shortly after four o’clock, I went into the house to refresh my drink, and as I returned, I noticed movement in tall grass a hundred yards down the hillside. I raised my binoculars: Red Fox stared back at me, yellowish eyes with intelligence and cunning. Survivor’s eyes. Perhaps it was an illusion. She might have been looking at something else, but I felt she saw and recognized me from her other visits, always staying on the wild land below, never entering sovereign human territory. As I watched, she suddenly jumped, ears perked up straight, and vanished in a wave of moving yellow grass, startled by something.

Moments later, I heard cantering hoofbeats to my left, looked, and observed Wes Ducks atop his white stallion emerging from the oaks. He was wearing a ranch hand’s faded blue jeans, denim jacket, straw Stetson, and cowboy boots, nothing stylish or fancy.

A few months ago, I pressed charges against him for arson and the court convicted him, fined him, and stripped him of his authority as a lawman. As much as I detested him, I admired the way he looked and moved, as if joined to his horse. I stood up and waited as he came closer. The horse slowed to a walking gait and stopped by my front porch. Ducks looked down and tapped the brim of his hat. “Can we talk?” he said.