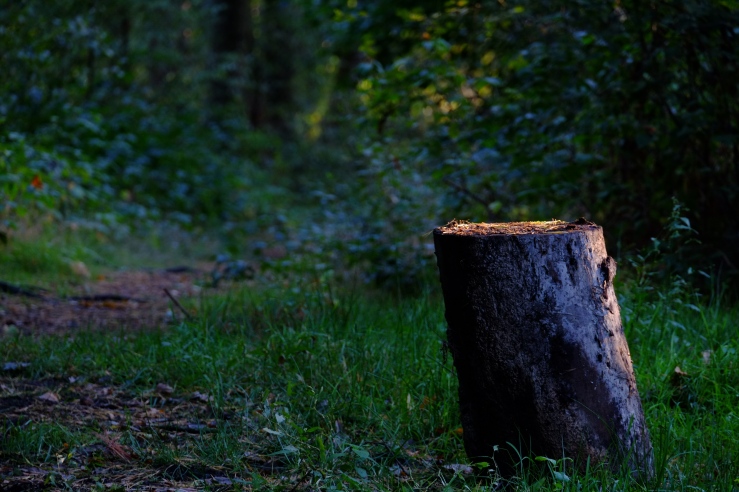 Lorne wondered where Jessie had run too. It had been a year since she disappeared yet tonight he felt the need to sit on his porch and call her name. “Jessie!” He let out a loud whistle but the bushes stood still.

The house itself wasn’t doing so well. There was a leaky roof and the windows were mostly boarded up. The electricity came on and off like a ghost was flipping the switch. His only neighbors were a family forty-five minutes through the woods. Maybe Jessie was with them, he thought.

Lorne had shot a bunch of holes in the walls one night when he thought someone was creeping outside. He kept firing his rifle until he ran out of ammo. Tonight he heard something different. It didn’t sound like a person, more like a suffering animal. He crawled out of his bed and stuck an eye through one of the holes. He couldn’t see anything but he heard a moaning sound.

Should I just let it die? he asked himself. Even though it was out of bullets, he picked up his rifle and a flashlight and walked outside as the porch bulb flickered. When he heard a quiet grunt come from the outhouse, he quickly pointed his flashlight in that direction. What he saw just didn’t look right. It was some animal. Its body was big and furry like a bear’s, but its head was sort of human-shaped. It was leaning against the side of the outhouse with a hunter’s trap on one of its forearms.

“That looks painful,” Lorne said aloud. He noticed this animal had large hands, sort of swollen. They were covered with dry mud and reminded him of those Incredible Hulk gloves he saw his nephew playing with one Christmas. That was such a long time ago, Lorne thought.

When he moved his flashlight onto the animal’s face, he saw it was young and Neanderthal-like. Probably it’s just a child, he thought to himself. He could tell it was scared. He set his rifle down and asked the animal, “Why did you come here?” The animal whistled a response. Lorne paused in thought then asked, “Do you know Jessie? Have you seen her? She was my dog.” The animal whistled again. Lorne took that whistle as an affirmative. “Let me help you,” he said.

The porch light went on and off and, for a moment, Lorne looked directly in the animal’s eyes. He reached out his hands and ran them over its fur. He remembered what it was like to pet a dog. “Chester,” he said, “I’ll call you Chester.” Lorne reached down and removed the hunter’s trap from the animal’s forearm. Once free, the frightened thing hopped away from Lorne rather quickly, but in the darkness, Lorne could make out that it had stopped just at the edge of the woods. “Come back anytime, Chester,” he said and waved.

Brandon Freels has an MS in Writing/Publishing from Portland State University. His poems have appeared in The Bitter Oleander, Exquisite Corpse, Hobart, and other publications. He can be found at brandonfreels.com and @koalacanth.