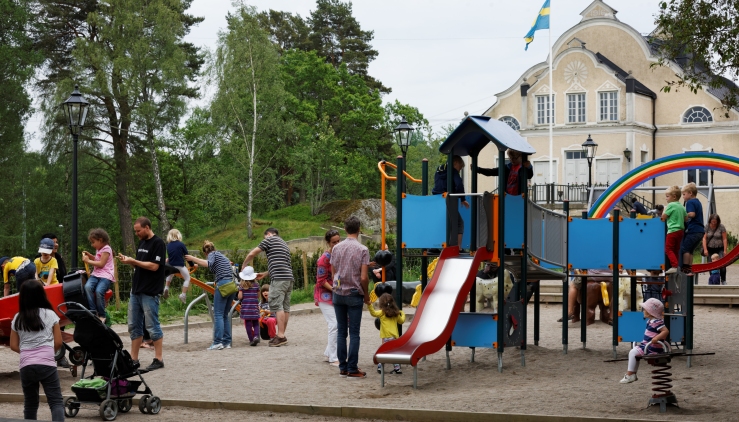 Stuart stood aside as a woman left the baby changing facility, shoving a black-haired tot in one of those fancy pushchairs that cost more than your average house. It grinned gummily in his direction and he waved, in that slightly foolish way that adults wave at babies. He slid inside, wheeling his own boy, Theo, in front of him in a much lower-budget pushchair. He ruffled Theo’s blonde mop.

Inside stood a woman with too much make-up, big hair and a smile so bright it could guide ships away from rocks. Her name tag read: ‘Hi, I’m Belinda. Ask me about washable nappies.’ Behind her, shelf upon shelf of babies, each displayed neatly in boxes fastened with colourful ribbon, stretched to the ceiling. ‘Hello, Sir,’ said Belinda. ‘Here to change your baby?’ Stuart nodded. She peered down at Theo. ‘Christ,’ she said. ‘Look at the nose on that. Can’t say I blame you. Do have a browse around, I’m sure you’ll find a kid you can swap for little hooterface here.’

‘Been open long?’ he asked as his eyes scanned rows of tiny tots. The noise made by dozens of thumbs being sucked simultaneously reminded him oddly of crickets.

‘Just a couple of weeks,’ said Belinda. ‘But we’re so busy! Honestly, everyone moans about the government, but this baby exchange was such a great idea. People can dump their old kids, get brand new ones, no questions asked. And it saves the state ever such a lot of money. No more homing and rehoming unwanted babies for them. It all happens here!’

Stuart nodded, then pointed at a child that caught his eye. ‘That one, please.’

A few minutes later, Stuart strolled towards a nearby coffee shop, pushing a baby girl. His fiancee, Sarah, was waiting at an outside table. When she saw him with the girl, her eyes went wide. ‘Stuart,’ she yelled, pointing at the infant and almost spilling her chai latte. ‘Who the hell is this?’

‘Much better than Theo. Glad to see the back of him, to be honest.’

Sarah was sobbing now. ‘What have you done?’ she choked, tears dribbling down her face and pooling on the table.

‘I said,’ shouted Sarah, recovering somewhat, ‘go to the baby changing facility and swap Theo for another boy, one with dark hair, a bit mediterranean-looking, like you see in those holiday ads for Greek islands. A kid more presentable for my Friday morning get-togethers with the other mothers than the Incredible Conk. What I didn’t ask for was a bloody girl! And most certainly not a carrot-top! What the hell is wrong with you?’

‘I think she’s pretty,’ sulked Stuart. ‘She’s got the same colour hair as my Mum.’

‘As long as she doesn’t sink a bottle of gin every day! Or steal from my purse when she thinks no-one’s looking!’

Stuart glared at his betrothed. ‘She did that once!’ he yelled. ‘Once!’ He marched away, shoving the redheaded newborn ahead of him. Sarah glanced at him, back at her latte, then reached a decision and scuttled off in pursuit.

As she left, a young couple entered the coffee shop and approached the counter. The girl had Theo clasped to her chest. ‘What’ll it be, folks?’ asked the barista. He glanced at the infant. ‘Christ,’ he said. ‘Look at the nose on that.’

Theo sneezed. A wodge of green snot hit the barista in the eye.

David Cook’s stories have been published in the National Flash Fiction Anthology, Barren, the Sunlight Press, Spelk and more. Say hi on Twitter @davidcook100. He lives in Bridgend, Wales, with his wife and daughter, who was never swapped and never would be.