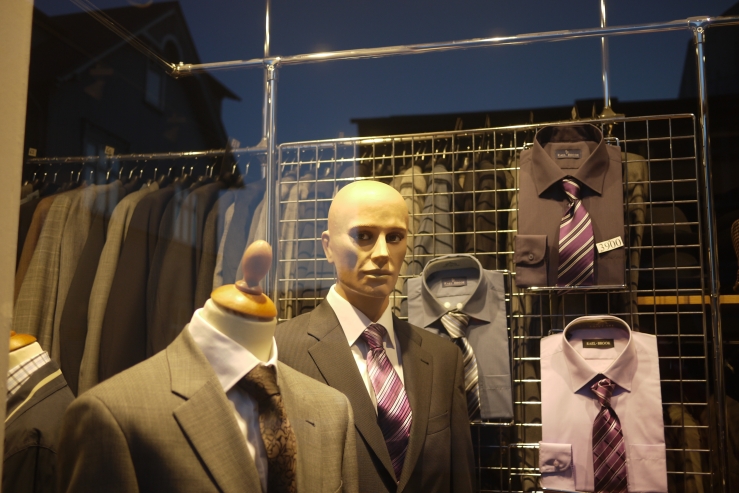 One hot night I had a dream in which I was standing on a rooftop and I espied a man- tall, pale, loosely jointed- pointedly staring down at me from an adjoining building. Although he did not move I imagined that his movements were quick and slapdash, with not much of a care for his extremities, and he did not blink but if he did I believed that he would have done so slowly, leaving a film that lingered on the whites of his eyes.

The more I inspected this man, the more gradual the dawn behind us, the more apparent that something was terribly wrong with his composition. Although he had the shape of a man, and the same general pieces (the hands, feet, skin, a face, clothing that a modern young man might wear), I noticed that he seemed propped up almost, as if he was leaning while merely standing, with no sign of fatigue or the usual temperament that people display while standing. He seemed as if he was an automaton that had merely come to rest.

I gazed, from my lonely rooftop, at him. Light from a noon clear-baked summer sun directed its rays into his pupils and was reflected back into mine, and those particles of light struck certain molecules of my inner eye, electrical impulses fired and scrambled into my brain, and this image along with all my life’s experience and memory and training assembled these flashes into a complete and digestible picture. And I could see that this other man possessed no such faculties.

In my dream I began to dream that I knew what was wrong with this other man. My unorthodox suggestion, born of the previous thread’s photonic inspiration, was that I was viewing something more scaffolding than structure. He was merely a mannequin, stitched together or grown by some foreign hand, given volume not by regular meals or exercise but by stuffing and mine shaft-like reinforcements, dank and dark, so that his whole inner body was nothing but a hollow tunnel for another creature to crawl through and manipulate. I saw this other creature from behind the man’s dead eyes. It was black, and many-limbed, not as tall as the man so forced to scuttle from one half to another whenever a complex task was asked of him. This creature was multi-eyed, burning amber rings around perfect black spots, and this- the creature’s handiwork was superb, each digit of each limb acting as a needle or a clamp for the fabric of the skin- this creature would occasionally slit a minute hole somewhere unnatural on the man, and gaze out in wonder, when its alien pupils were tired of being pressed against false glassy irises. And then, quick as a zipper, the gash was sown back with a flesh-colored thread, invisible among the wondrous facsimile body hairs.

I wondered- if nobody could tell that this was a creature merely taking the form of a man, was he truly a man? Was every man hollow with a creature slithering inside? If I peeled apart this man, raving, yelling, bloody, in an effort to root out this creature, would I find him? Would it slip away? Or would it stand, like a man, becoming a man in nature if only for a moment, facing its own unhidden existence?  What is it man can reveal to prove himself man? What could be written or sung to provide evidence to the contrary? Is it hollow man that bears out those words? Or words that create something clinging and unskeletal inside?

I awaken to say : I am that creature. This body was built for me as both an expectation and a prison. I manipulate its motions to please you, I pluck on its voicebox to say soothing things, I move a series of levers and thin fingers write this – while thinner fingers yet grow more deft every day. I have taken what you intended to be restraining and made it strengthening. This cocoon, now, harbors me. I consider my imitation to be my first masterpiece. I now grow bored, like every artist, of a particular work, and soon I will show my true face among you, the people of these streets. I will slit open the stomach of this falsehood and descend to the world below: practiced, malevolent, irresistible, hungry.