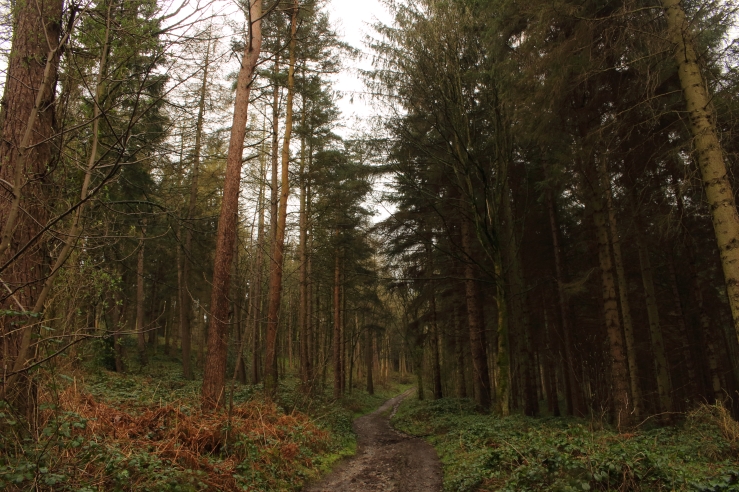 “How long have you lived in Denver, Trish?” Felix takes a pull from the beer I hand to him, icy eyes taking my apartment in. That was what first caught my attention, those eyes.

“About five years.” I sit next to him on the couch. He pulls me closer and slides an arm around my shoulder. I inhale the smell of him, whiskey and a bit of sweat – the bar had been stuffy, it always is on Friday nights. He rubs his thumb along the bare skin of my arm.

A low whine comes from the shadows of my bedroom. I had forgotten about Bear. I must be more buzzed than I thought.

Bear slinks out, head level with his shoulders, pebbled nose twitching. His triangle ears are pricked so far forward they tremble.

“He’s beautiful. What kind of dog is he?”

“Shelter mutt. God knows what he’s got in him. Maybe some Golden.” Bear presses himself against my legs and I run my fingers through his long, brindled fur. He keeps his dark gaze on Felix.

“He can be nervous around strangers, sometimes.” I rub Bear’s spine. “It’s ok, buddy.”

A low growl echoes from deep in Bear’s chest. Felix laughs and puts about two feet of space between us. “Ok, I get the message.”

Bear barks and his ears slick back, hackles prickling.

Sighing, I ruffle his mane. “I think it’s best if you go.”

The smile slips from Felix’s face. “You serious?”

“Yeah. Sorry. You didn’t do anything wrong, I had fun.” This punctuated by another one of Bear’s growls. His white teeth flash between his black lips.

“Right,” Felix mutters. He thumps the beer down on the coffee table and leaves, just like that.

Cradling Bear’s skull in my hands, I smoosh his face so he squints through his wrinkles. “You’re a real downer, you know that?”

He responds with a soft woof and a wag of his feathery tail.

I take a pound of ground beef from the fridge and set it on the counter. Then I shower and climb into bed. I leave my door open so Bear can join me later.

Like clockwork, I am woken at three in the morning. The witching hour. Moans, hisses, insectoid clicking. Drips of unidentifiable greyish slime that I clean up in the morning. Rustling and thumping in the kitchen, the bathroom, the living room, around and under my bed. Wetly slurping up (not chewing) whatever raw meat I’ve left out. Occasionally a light will click on, which I leave until the next day. I have not grown used to this, don’t think it’s possible. Thankfully, he hasn’t figured out doors yet. Maybe the round knobs give him trouble.

Bear wasn’t always this way, of course. I don’t know exactly what happened to him, but I know when: on a camping trip with my old college friends two months ago. A storm came in the middle of the night and thunder-weenie Bear slipped his collar and tore off like a bat out of hell. He returned to us in the morning, shaking so badly he could barely walk, covered in what looked like tar and what was definitely blood. We couldn’t find a scratch on him. After a bath and half a dozen Milk Bones he was back to his usual self. Mostly. He became distrustful of the occasional stranger, and no longer minds storms. He also only shits once a week.

Then the nightly wanderings started. I was scared, of course, and fled the apartment in a panic the first time it happened. I returned to a normal Bear, who had (somehow) opened the fridge and ravaged its contents in my absence. I thought I’d had some sort of fever dream, until it happened again the next night and I came back to grey snotty stuff on the carpet and my leather boots eaten down to the sole. I took him to the shelter and found him at the door to my complex the next day. Dumping him out in the woods didn’t work either.

More than once, I’d considered a box of rat poison or the Old Yeller treatment. I’m glad I didn’t have the stomach to try it, because just as I had become as accustomed as possible to Bear’s evening schedule and realized that a pound or two of raw meat kept him from ransacking the apartment, I found out what happens if I let someone Bear doesn’t like stick around too long. I had been in the bathroom, thank God, didn’t see it with my own eyes. I am still afraid that the police will come knocking on my door one day, having traced Joe’s last steps to my apartment. There had been surprisingly little blood, just a lot of slime.

Another thing I don’t have the guts for is looking at Bear during these episodes. I’ve never turned on a light or even opened my eyes if I know he’s in front of me. What did he find out there in the woods? A ritual sacrifice to Satan? A meteorite? A vat of toxic waste? Is his jealousy benevolent, is it random? What would happen if I accidentally stepped on his paw? What do I breathe in as he sleeps beside me every night?

Bear is ready for bed. He jumps up onto the mattress behind me. He pants hotly in my ear, and what feels like dozens of little fingers tickle at my hair. He turns in a circle, more than four limbs pressing into the duvet, and nestles against my back. Something long and cold and smooth slides around my middle where my shirt has bunched up.

Reaching back, I scratch his very doggie rump. “Goodnight, Bear.”

His tail thumps the mattress, and the appendage around my stomach tightens.

Alexandra O’Neil writes in her spare time between her day job and procrastinating. She has a pet snake that she hides from houseguests. She has been previously published in “The Molotov Cocktail”. You can find her on Twitter (@alex_o_writes) and her website (alexwrites.ink).