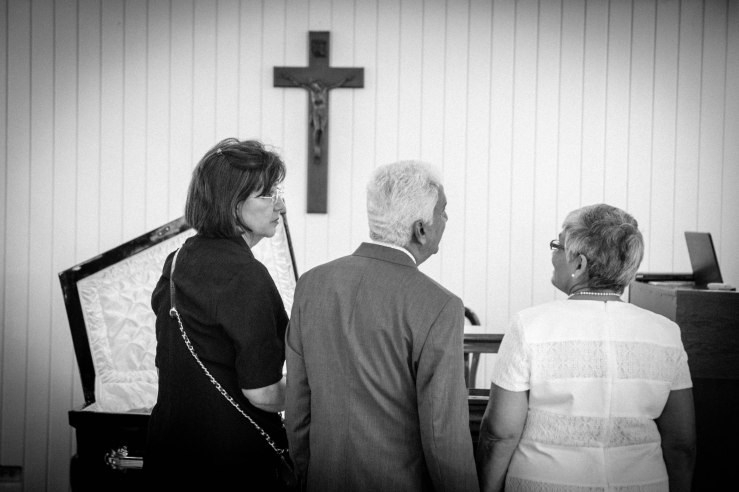 Mallory would never say it out loud but she always thought the ramshackle barn on Cline Hollow and her ancient uncle would both outlive her. They seemed sturdy, toughened, relentlessly exposed but almost equally immune.

So When Uncle Errol announced he was having a funeral for himself while he was alive, it made a kind of sense to her at the time. Why not have a funeral if you were going to live possibly forever? Or at least longer than everyone you know. But that making sense was short lived.

He didn’t belong to a church per se, so being a former Harley man, he chose the one in town that hosted the Blessing of the Bikes every spring.

Morbidity seemed to envelop Mallory without her trying to conjure it. Her full name, Mallory Clayton, was displayed on a sample plot outside the stonework place up the street, and she would pass her own tombstone on the way to the store. Eventually you become blind to your surroundings, and Mallory was no exception, even with something like this.

He began to plan with an earnestness. For upwards of 65 days, he procured, extracted, snuck, and quarried various materials he deemed useful for such an event. Poor Aunt Nancy didn’t appear outwardly querulous. She was suspiciously helpful with planning.

Aunt Nancy never considered herself an optimist yet she always assumed the cobwebs she walked into were just that—cobwebs and not active webs—as she brushed them off.

Errol called up Mallory and told her to stop by when she could. Nancy was humming to herself as she ironed doilies in the alcove between the dining and living rooms when Mallory arrived.

“Would you do me a favor?” Errol asked. “Go down to the Ames and get me a pair of them nice black jeans.”

The subject was dropped after that.

They stared at some angel figurines on the hutch until Errol pulled a hardcover journal out from underneath a couch cushion.

“As you know, I’m settling my accounts, straightening up my affairs. This is my logbook.”

He gave his best poring-over-figures-and-shifting-decimal-points look that could have been convincing with a different crowd. The logbook was blank and everyone in the room knew it.

“Of course, I’ve got your Aunt Nan to think about, but there may be something left in here for you, depending on how your speech turns out.”

Nobody said anything for about a minute.

Mallory took a moment to reflect on the memories they shared but could only think of the day she came over to play with her out-of-state cousins. They played hard. When her mom came to pick her up, she could only find one shoe. They looked under furniture, behind doors, all over the house, out in the yard.

Mallory limped to the car that day. They never found the missing shoe. Even after two separate renovations. Her mother still kept the other one though.

Her aunt and uncle had a mailbox and then another post right beside it just for the newspaper. The newspaper holder was always empty, a mouth agape.

None of this was material she could use.

The funeral director smelled like Herbal Essences and still chewed bubblegum. Perhaps this was the only professional in the vicinity who would comply with such a memorial.

Mallory arrived early to help but ended up playing 20 Questions in the hallway with her first cousin once removed.

“Is it an animal, vegetable, or mineral?” she asked Cole tonelessly while eavesdropping on the other adults.

“What time is it?” Mallory’s mother asked.

Had anyone ever kept track of time that way, Mallory wondered. Maybe she was faking her enthusiasm after all.

With Errol’s ego at stake, Mallory was slightly concerned this thing could turn out as unattended as a school bus in summertime. And yet here they all were.

An intern from the local paper lurked in the narthex.

Meanwhile, Errol had mixed his own blend of benzodiazepines in order to lie realistically still in the open casket. The flower arrangements on either side of him were unapologetically ugly.

When it was Mallory’s turn to speak, she began the only way she knew how.

“You don’t really know a place until you’ve memorized its personal injury lawyers’ catchphrases. And sweet Uncle Errol had memorized them all.”

A few nodded from the pews.

“Some claimed he even had a photographic memory.”

Mallory continued, lauding her uncle’s character in ways that weren’t overtly deceptive, and somehow made a whole speech of it, though who really knows what was said. She wondered what Errol thought of it but he was unavailable for comment.

“Don’t ask me who will replace him in this town because I’m not sure it’s possible,” she concluded, stepping down and returning to her seat.

Aunt Nancy contributed next, but was simply relaying Errol’s own parting words to his sworn enemy, who happened to be in attendance.

“I will be the puddle that forms on your driveway from your dripping AC window unit. In this way, I will show you that you try to change the atmosphere but you can’t control everything. You can’t really control much of anything, in fact. I will then evaporate into the exact kind of humidity you are attempting to extricate.”

Some people claim to have spotted a smirk on Errol’s face from the casket, but this was disputed.

When he actually did pass away a few years later, he had already done everything there was to do. They were left with nothing. And nothing was a mighty gift.

His demise was a matter of time, as he was getting on in years and refused to go to the doctor. The doctor’s office with its various containers of swabs might have been too much for him. Why are they always swabbing? What makes them think they can capture your insides on some cotton? Mallory could hear him saying something like this.

He probably could have outlived everyone but chose not to, she thought.

She moved to Ohio in order to regroup. She lived across from a rowdy set of neighbors who always left stray pieces of particle board entertainment centers on the sidewalk. It seemed like a new (yet incredibly old-looking) one appeared out there every few weeks. Sometimes in defiance she pointed the warped pieces in the direction of Pennsylvania as a mutant form of homage.

Claire Hopple is the author of TOO MUCH OF THE WRONG THING (Truth Serum Press, 2017). Her fiction has appeared in Hobart, Monkeybicycle, Bluestem, X-R-A-Y, Timber, Heavy Feather Review, and others. More atclairehopple.com.