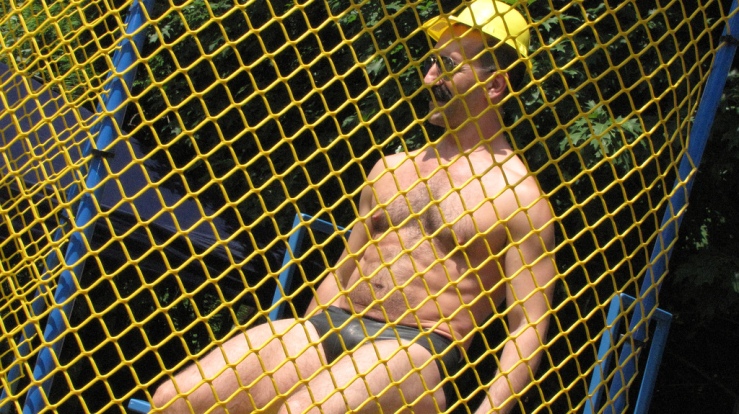 Fisty pistons those fists of sponge, plunged again and again into plastic buckets and beneath a sky of bad angles and branches like nails:

He’d woken that day with a familiar ache warming his jaw. It was Saturday, the day of the village fete and in less than four hours his head would be secured between numbing hands clasped in mediaeval stocks and villagers, all known to him, would be lined before him, each with a dripping sponge clenched in their fist.

Although the first was always the worse, each subsequent volley, (although diminished by familiarity) still arrived – thanks to that clement zephyr that twisted through the denes in June – ably equipped to deliver sufficient discomfort.

The day passed slowly and as soft waves converged to form an endless sea, James realised he’d made a terrible mistake. Nodding halfwit – saturated in more applause then water. How had he not foreseen that any intention, when sanctioned by compassionate enterprise, becomes reaved of its identity. As his hair dripped and fingers blued, he longed for different days, days bruised by a parent’s despairing whispers or a lover’s vicious asides.

After being unlocked from the stocks, he returned to his car, lifted the Toyota’s filthy tailgate and began to change out of his sodden clothes. First, he pulled hard on his shirt, but cotton and water conspired to form a sucker at his crown, so by the time he’d pulled it free, he was bent double with the effort. Next, he rolled jeans down his cold floury thighs and finally, balancing on one foot then the other, he snapped off his socks, noting as he did, both were completely ruined.

The bruxism again, a snap of enamel – powder and iron as anger wound his musculi masticatorii. James tried to control it – ignore it. He busied himself, forced his wet clobber beneath the spare tyre and jumped in the car. But as he bumped out the fete’s muddy car park his obsessions accrued and he chewed and ground and cursed himself over and over and over again.

As he joined the narrow country lane, he noticed something in the road ahead. Initially, he took it for a fleck of litter caught in the tiny summer twister. but as he got closer he saw it was an injured animal – a squirrel – its skull had been crushed flat and its body, now separated from its mind’s reigns, spasmed madly about the gummed spot. After checking his mirror, James eased down on the accelerator and gently adjusting the car’s trajectory, ran it down with both off side tyres.

Years of compulsion had transformed James from hobbyist to cognoscenti and now he longed to cosset, to inwardly curate only the most particular judgements. To seduce his interest, they must appear costively yet with a persistence suggesting external decree, and they must – since they should always lack cohesion – strive blindly for precision. Only then would they obtain currency, evoking, like a missive incised in a shit-house door, the most pervasive – most gratifying – genus of guilt.

James couldn’t remember the first time, but it would have been a Monday, he would have been tired; the first, sitting cross-legged at his side, would not be known to him. But would soon become familiar.

As they all would.

As time gathered and stacked, James had sought to discover ways to have fun that would not bury him or drag him behind bars. Up in the attic, Mr Flash, the cat – chalk stripped affection broker – asleep and cleaved to a spot of sun on the dusty pile as James knelt at the window and spied the square’s silent clatter. Old farmer Wilson with his spinning wince and Bev the barber with her weeping arms and posty Tom with his green stools and night-shouts and more, so many, James couldn’t recall most of their names.

Between his fingers, the slow comforting drag of binoculars led him down to a restaurant floor littered with china. Then across to the Joe’s Coachworks fugged with fumes and throttled with machines and finally to the market stall dripping with rotten oranges.

James laid down the lenses and stood a while pinching at his wrists.

These are the days, he thought, these days that drift.

This is the life.

GJ Hart currently lives and works in London and has had stories published in The Molotov Cocktail, The Jersey Devil Press, the Harpoon Review and others can be found arguing with himself over @gj_hart.