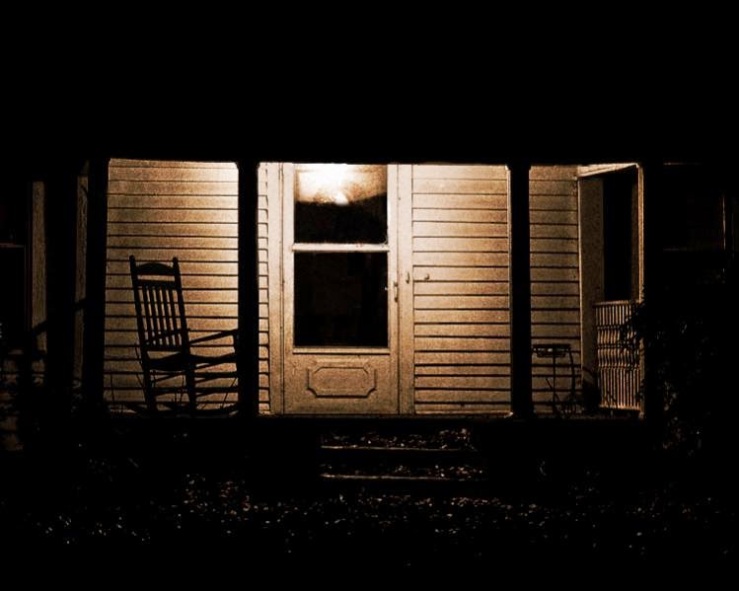 “Now,” the older man in the passenger seat of the pickup truck said, “this is all out of my hands. If it was up to me, I wouldn’t put you in this position.” He held his hands up, visible only from the glow of the instrument panel.

“You’re awful quiet back there Jayden,” the driver said. He took the curves of the winding mountain road without slowing down. The chassis of the truck bounced and rattled.

“Now,” the older man said, “I don’t want you to go home to your pretty little wife and tell her we threatened you. Joe and I, well, we didn’t want it come to this.” He spoke as if he was comforting someone.

“Your wife has a real nice ass,” Joe said, cutting the wheel to get around a curve. Jayden lurched over in the back seat and the older man glanced back at him and then looked ahead. He did not brace himself when Joe made a turn.

“Now don’t be rude and vulgar to Jayden here.” The older man shook his head. “It’s a damn shame it had to be this way,” he said. He paused and sniffed. “What is that?” He unrolled his window and took a handkerchief from his pocket.

“He’s gone and pissed himself.” Joe wheeled around another curve, straining the truck.

“Don’t tip!” Jayden screamed, seeing the black gorge on the other side. He did not know it was only a twenty foot drop on a gentle curve. They would not die even if Joe lost control.

“Jayden I know you want to help people, and that’s the Christian thing to do. Oh you aren’t a Christian I forgot. Well, what you want to do aint going to help anyone,” the older man said. “According to Big Jim of course. You just can’t bring in any kind of folks you want here. Big Jim says that’s not going to work.”

“He’s not arguing now. You usually have a lot to say, Jayden,” Joe says. He lit a cigarette and the smoke stench made Jayden hack. “Well boy I wouldn’t have to light up if you didn’t piss on my back seat.” Joe punched a cassette tape into his stereo. It was an old country rock tape. Jayden couldn’t remember the name of the album even though he was sure he had it. Jayden had a cassette collection. He started collecting them two years ago. Vinyl was becoming too bougie. He thought about his cassette collection to keep himself from throwing up again. He tried to run through the list of his cassettes. He had three hundred and fifty two. Joe using cassettes bothered Jayden because it was gauche. Jayden tried to avoid being gauche as much as possible. It was his version of the golden rule.

“Don’t throw up again, damn it,” Joe said. He unrolled the back windows.

“Now,” the older man said. “We’re going to have to pull off and get you cleaned up.”

Joe shook his head. “He ain’t going to run off. Right, Jayden?”

Jayden dry heaved again. His eyes rolled back. Pink Floyd—Dark Side of the Moon…Fleetwood Mac—which albums on tape…? Part Time—HFM…then the eighties ones bought because I hate the eighties…no he was out of order now, going from classic and jumping to contemporary and then back again.

Joe drove into a gravel driveway and laughed as he drifted onto the lawn. The truck shook and spent shell casings rolled out from under the back seat. Jayden stared at them.

The older man and Joe got out of the truck. Joe pulled Jayden out of the back seat. He tripped coming out of the vehicle and landed on all fours where he kept dry heaving and his tongue stuck out.

The older man spoke to someone on the porch of the old farmhouse. Jayden saw their outlines from the bulb swinging, burning over the front door.

“Come on now,” Joe said, pulling Jayden by the waistband of his jeans. Jayden saw a gun with a silver finish tucked into Joe’s belt.

“Is that a question or a request,” Joe laughed and then went quiet. His expression sobered and he looked down at his captive. He pulled a garden hose out from the side of the porch. He sprayed Jayden with the freezing well water. Jayden had to have a filter system at home. His son couldn’t drink unfiltered well water. It made him sick. He and his wife only had one son. That was what they agreed on. The hose water made him shiver and he stared up at the bright bulb and his eyes began to hurt. The older man and the man on the porch continued to talk.

“Drink up. You lost your fluids, partner,” Joe said, grinning and lighting another cigarette with one hand while he sprayed water at Jayden’s face with the other.

Smoking kills, Jayden’s mind rambled. He needed to keep his son away from the smokers here. His son was born underweight. Jayden thought his wife was the strongest person in the world.

“Alright,” Joe said. “That’s enough for now. Get him a towel.” The third man went inside and came out a while later with a thick towel that Jayden thought was a blanket. He draped it over Jayden and then went inside. The screen door slammed and the sound made Jayden feel sick again.

“Come sit on the porch,” the older man said. Jayden crawled over to the porch and pulled himself up and sat on the edge. His feet dangled over the lawn. He sat hunched over, next to the older man. Joe sat on Jayden’s other side.

“Why would we do that? Big Jim don’t do things that way.”

“Well, he can talk again. You want me to kill you?” Joe said. He took the gun—guns were phallic symbols, Jayden remembered from college—and pressed the muzzle to his temple. He drew back the hammer and pulled the trigger and the gun clicked. “It’s empty, dumbass,” Joe said, opening the empty cylinder and spinning it. “Last thing I need is a murder charge for shooting some yuppie.”

Yuppie was an outdated term. Of course they would use it, Jayden thought. Saying ‘yuppie’ was gauche. Using yuppie unironically was definitely gauche. Just like the way they used cassettes or CDs.

The older man snapped his fingers. “Listen now, Jayden. We have a way of doing things here.”

“How much to leave me alone,” Jayden said through chattering teeth. “I’ll move away forever.”

“Now,” the older man said. “I wish it didn’t have to come to this. But Big Jim doesn’t like people coming in an’ undoing what we’ve got here. Joe and I, our families have been here for generations. Big Jim’s family may as well have sprung up from the ground here,” he laughed.

“Where are you from, Jayden,” Joe said.

“I was based in Austin before I came here.”

“We have a way of doing things,” the older man said. “We like it when people follow that. We’ll let you make a home here. It would be the Christian thing for us to do.”