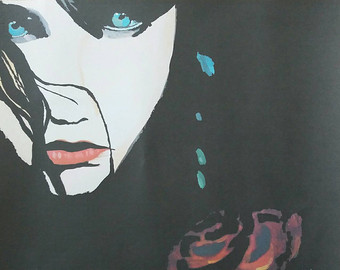 It has been 131 days, and I am starting to lose sight of why I’ve bothered to count.

I am afraid. The clouds above appear stagnant and unreal, almost as though I might have cut them out and glued them there, recycled from a memory I’ve chosen to forget. They are familiar to me in a way that seems dangerous.

It is one thing to feel alone, and it is quite another to realize that there is no company in any reality but oneself. This preoccupation of mine is troubling enough to rob me of even the comfort of my dreams, and there is nothing in this world that can alleviate the ache but me. Instinctually, we turn to others for guidance – they, too, are afflicted by the human condition, so surely, they must be able to provide some insight…? No. We are all just as lost as the others. There is neither peace nor solace in that. There is no underlying poetic wisdom. We are all doomed to speculate until, finally, we rot.

I wasn’t meant for this.

Had I been, perhaps I’d understand what to do with my body when it feels so horrifyingly out of place in any space larger than my bedroom. For a species gifted with the art of communication, we succumb to silence so easily.

I miss the days that weren’t worth numbering, the ones that melted together, twisting into some conglomerate that apparently equates to existence. I miss them, but I can’t have them back. I can never have them back.

The unkempt stone tile of every public restroom is essentially the same in terms of temperature and appearance, I’ve found. Standardized. I’ve hidden out in far more than one or two of them; my legs are used to the chill. I am no stranger to excuses, but I have passed the point of transparency, and shame is not unlike misery in terms of its tendency to shy away from solitude.

It may seem strange, but this is easier in the summer. Skirts and dresses allow for a strained façade of elegance and freedom, and provide the most airflow. In the colder months, unless you’ve handfuls of gauze and tape at your disposal, jeans feel simply awful after the damage has been done. Every step is not only a chance for a tear, but for a reminder. Reminders are a chance for an opportunity. And thus, the cycle continues. It would find a way, regardless.

I would never claim to empathize, but I imagine this is how an addict must feel. Or, perhaps, a mammalian predator. Seizing a window of opportunity all for oneself brings a grotesque wave of pleasure and rage you can feel in the pit of your gut. It’s disgusting. Absolutely disgusting. And naturally, I love it; I never want to stop. For God’s sake, it’s free intoxication; what on Earth is better?

The tiles. They’re always the same. Cold and uninviting, but I make them mine. In these moments, they belong to me. There’s something perverse about using these establishments how I do, but again, this serves only as a supplement to that predatory hunger. I feel no shame. My back is to the wall and there is a song I’ve hated for years echoing from beyond the door. In this case, from a restaurant radio. Sometimes, songs will conjure a memory that helps me along. Cement for me a reason. I’ve a whole garden to harvest at my leisure.

My grandmother would have warned me about bacteria, were she here with me. For my hands to touch the bathroom floor and then immediately my open flesh? A travesty. I’ll wash my hands, don’t fret. This time isn’t the first nor the last. I know.

I remember them from my nightmares, but nowhere else.

You don’t remember them at all, do you?

I’ll never forget your face the day you found the first one. I’d barely done any harm, in my eyes. It was just a small gouge – perhaps an inch long, quarter-inch thick, and inflicted by the dullest paring knife I have ever had the displeasure of using (you really deserved better kitchen tools, by the way). Anyway, to you, that was hardly the case. To you, I did this to flesh you had spent nine months cultivating and thirteen years nurturing. To you, I may as well have cut you open, instead. I didn’t understand. I’m so sorry, Mama.

I told you I would stop that day. I told you I would stop when you said, “You’d better knock that shit off, god DAMN it,” and asked me “Why?” through clenched teeth and tears. I promised you. But I lied. It has been ten years and the hiatus I attempted means nothing anymore. These wounds multiply at a rate that I promise is not predetermined but God, I can’t stop.

It isn’t your fault, it’s mine.

It isn’t because of some failure you perceive in yourself. This is mine.

You don’t have to worry about punishing me. I will make myself pay. For every mistake, a tally mark, until I finally learn to quit making them entirely. To be perfect. I guess it takes a long time to achieve that, and I’m sorry. I’ll get there, one day. I’ll get somewhere.

I learned long ago to get the job done quick and clean. The clarity that follows is addicting and fulfilling, and I will wait anxiously for its return. After all, it’s mine alone to herald.

Like a responsible gun owner keeps a safe, I keep a bag with more than enough pockets to smuggle my tools wherever I please. Two zippers, three pockets – a handy safeguard against prying eyes – barely any time at all. I can wait, I can wait. At least I don’t shake anymore.

Left leg, right leg, left, right…probably left, always left. I wonder when I’ll run out of room. Can I? The temperature on the underside of my thighs has regulated. I’ve grown accustomed to the dim fluorescents and the white noise. Now, this is mine. Mine alone. Lord knows nothing else ever was.

There is another world out there, somewhere. It is one where day 254 drifts into my life, unnoticed, because at this point, I don’t bother to count. That world, aborted now, is lost to me. I can see it in the disaster I’ve just left on my flesh, but it’s like gazing upon an ancient photograph, now. Today I surrendered in a battle I likely could have won.

The sky outside is still breathing, and it is waiting for my return. This moment was made for me. The static and fog inside dissipates with a fervor so familiar. It’s all so familiar.

You may not remember them, but they remember you.

spacemortuary is an aspiring tattoo artist from the Pacific North West who’s just out here tryin to draw as many flowers and spread as much hope as possible. pancakes and strawberries and twitter @spacemortuary